Attack against the U-165 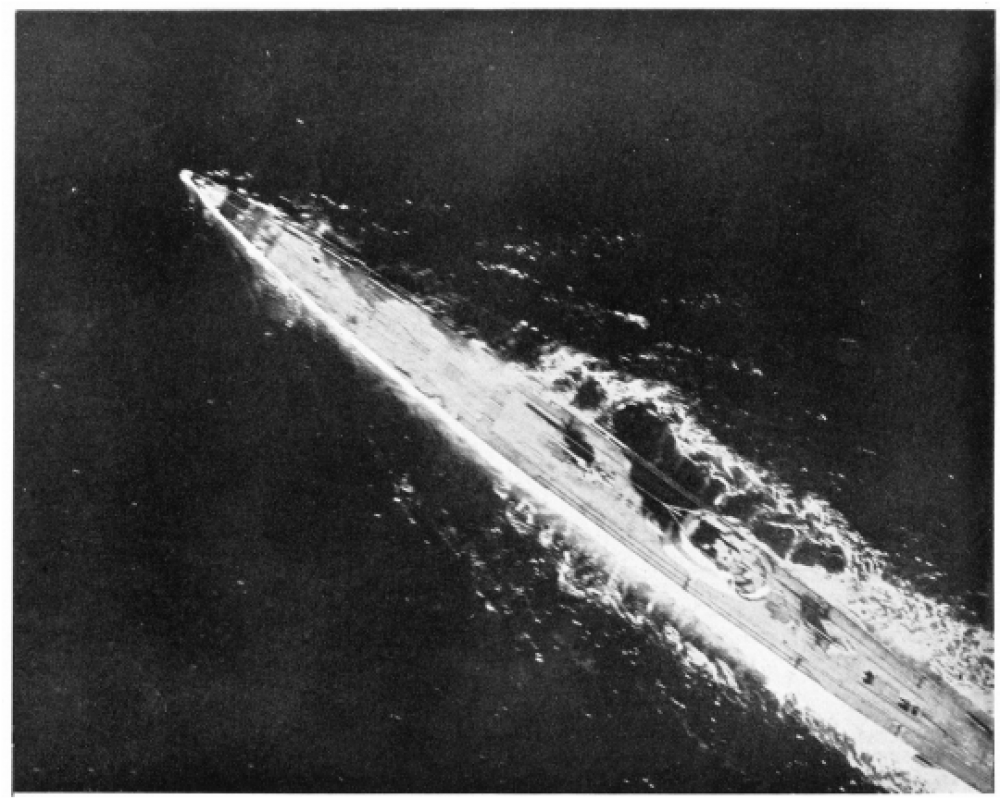 On September 9, 1942, a Lockheed Hudson Bombardier attacked the U-165, south of Anticosti Island, but the U-boat had time to dive to safety. Offensive air patrols played an important role in evacuating enemy U-boats in the autumn of 1942. During the Battle of the St. Lawrence, the U-165 torpedoed the Joannis, the Aeas and HMCS Raccoon, as well as damaging the Arlyn, the Laramie, the Essex Lance and the Pan York. 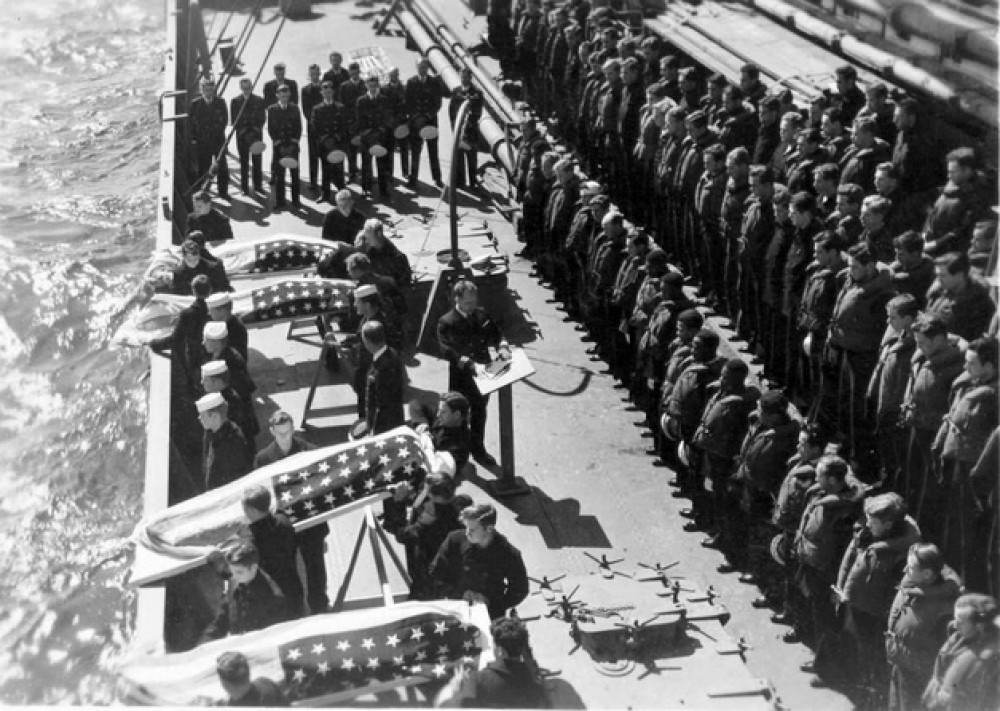 On August 27, 1942, an American ship, the Laramie, was attacked by the U-165 in the Strait of Belle-Isle. It was severely damaged by a torpedo but managed to remain afloat. The ship returned to Sydney unaided. After undergoing temporary repairs, the Laramie set sail to the United-States were it would undergo further repairs. Moved back to service, the ship would eventually be sent to scrap in 1947.

Funeral at sea aboard the Laramie for the four torpedo victims. Source: Collection of Rod Keller 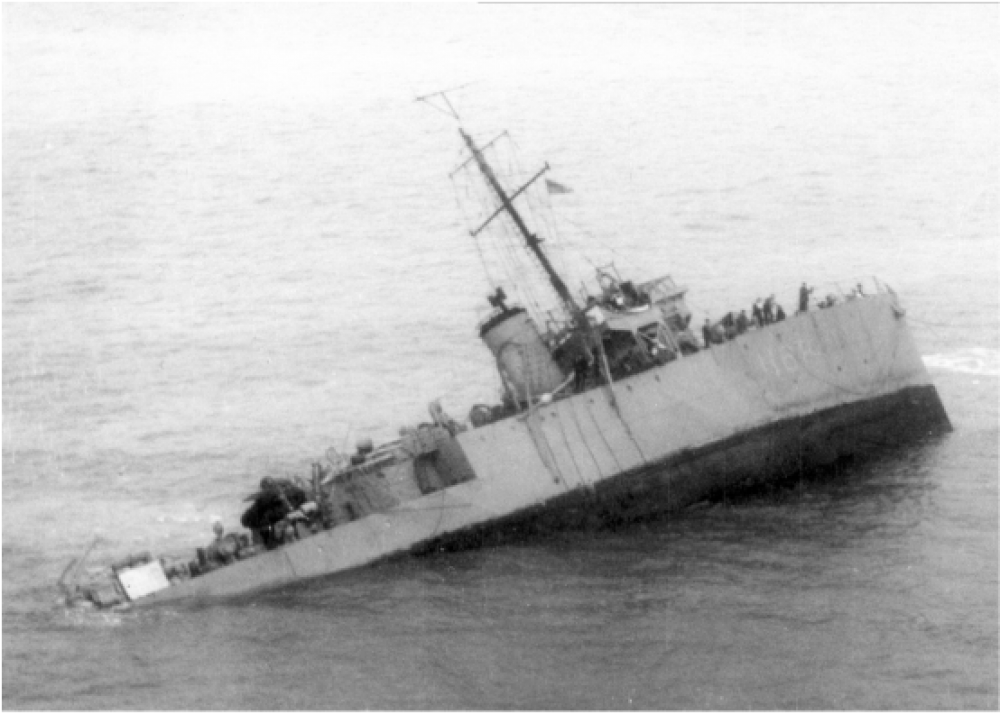 Two Brother buy the wreck of the Frederika Lensen 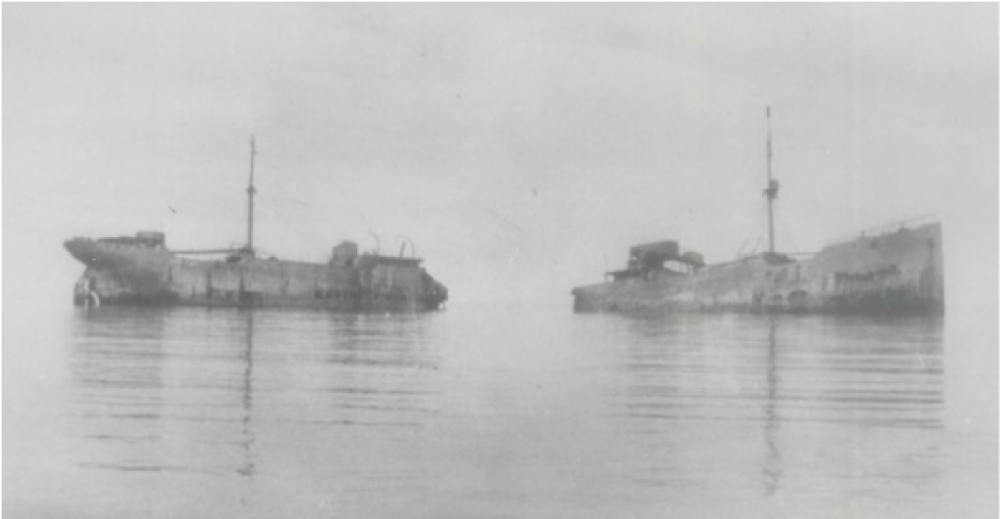 Severely damaged by the U-132’s torpedo on July 20, 1942, the Frederika Lensen was towed to the Bay of Grande-Vallée on the Gaspé Peninsular. Its hull was then exposed to bad weather and slowly broke into two. The wreck quickly became an obstacle for other ships.

In May 1944, the Gagnon brothers (Gagnon & Gagnon – Speciality: oxygen cutting steel and iron) bought the wreck of the Frederika Lensen from the British Ministry of War Transport for $300. The Gagnon brothers began dismantling the wreck on July 28, 1944. The following spring, they had to postpone their work as the final cost had surpassed their initial estimates. The Canadian Department of Transport refused to provide the Gagnon brothers with financial aid so that they could complete their work. Their agreement with the British Ministry of War Transport stated that they had to eliminate all traces of the wreck within a non-determined period. The Gagnon brothers believed that the remaining structure was dangerous for the many fishing boats that sailed the bay. The Department of Transport believed that the wreck was not an obstacle for other ships. The entrepreneurs from Cap-Chat lost a lot of money in this misadventure, but still managed to dismantle a significant portion of the wreck.

The two sections of the wreck slowly sank into the seabed until the end of the 1960s, when they disappeared under the water.

The wreck split into two in the Bay of Grande-Vallée in 1943. Source: Collection of Madeleine Côté, Naval Museum of Quebec

During the Battle of the St. Lawrence, Canadian warships were mandated to escort merchant ships. These ships sailed down-stream on the St. Lawrence until reaching a meeting point off the coast of Bic Island, where they would arrange themselves into convoy formation. After a port of call in Rimouski, convoy ships slowed and their pilot disembarked at the Pointe-au-Père pilot station. Once they left Pointe-au-Père, they had to overcome their first obstacle [1]. There were restricted access areas in front of Sainte-Luce, Sainte-Flavie, Grand-Métis and Métis-sur-Mer, as trainee gunners from the 9th Bombing and Gunnery School of Mont-Joli practiced over the river. They also used a practice target. 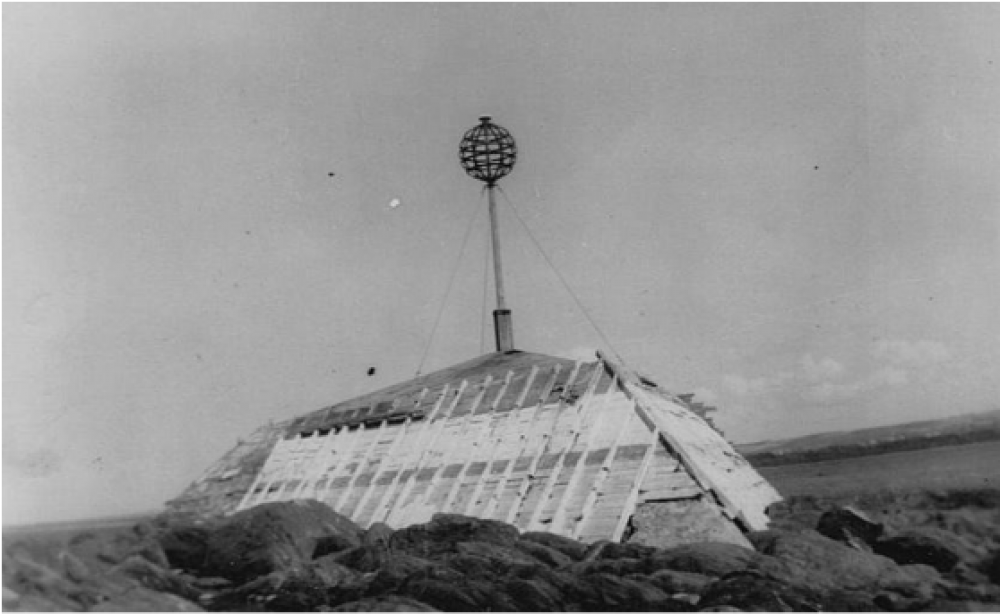 In the autumn of 1941, military officials offered Elsie Reford (the founder of Reford Gardens) financial compensation in order to use a parcel of land at the tip of Cenelles in Sainte-Flavie. This temporary military expropriation was limited to the duration of the war. Military officials used this parcel of land to build a reinforced concrete target covered with wood. From February 14, 1942, gunners fired their 11.5-pound practice bombs and .303 bullets at the target.

On October 14, 1944, HMCS Magog was attacked by the U-1223 off the coast of Pointe-des-Monts. This attack killed three people, the ship was damaged by an acoustic torpedo but did not sink. HMCS Toronto hoped to tow the ship, but as the U-1223 was still in the area, it first had to pursue the U-boat. HMCS Shawinigan therefore took over and towed the HMCS Magog to the Bay of Godbout, a location considered to be safe. On the following day, the Lord Strathcona towed HMCS Magog to Quebec. It was sold to scrap in 1945 because its structure was too badly damaged.
Source: Les naufrages du Québec au XXe siècle, Broquet, 2012, p. 68-69. (Translated into English) 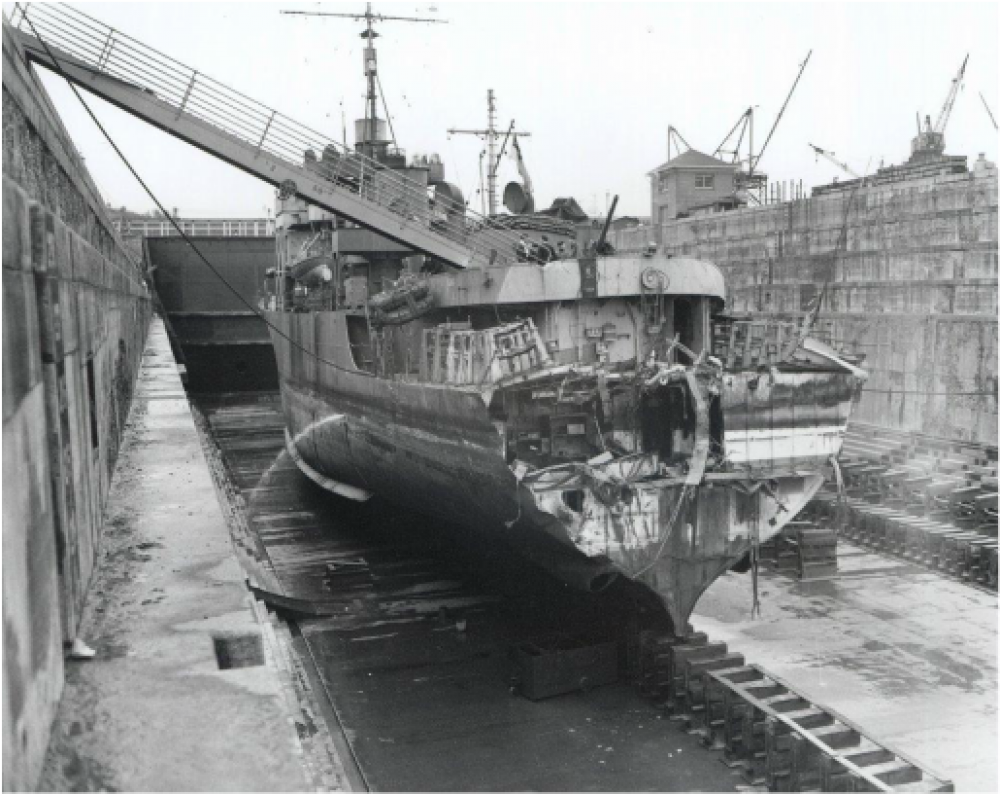 View of the damages suffered to the Fort Thompson’s deck. Source: Library and Archives Canada, Naval Museum of Quebec.

On November 2, 1944, the Fort Thompson, which was sailing unescorted, was attacked by the U-1223 close to Matane. It was damaged by a torpedo but remained afloat. The ship was repaired and moved back to service. Completed in 1942, the Fort Thompson was sent to scrap in 1959.
Source: Les naufrages du Québec au XXe siècle, Broquet, 2012, p. 70. (Translated into English) 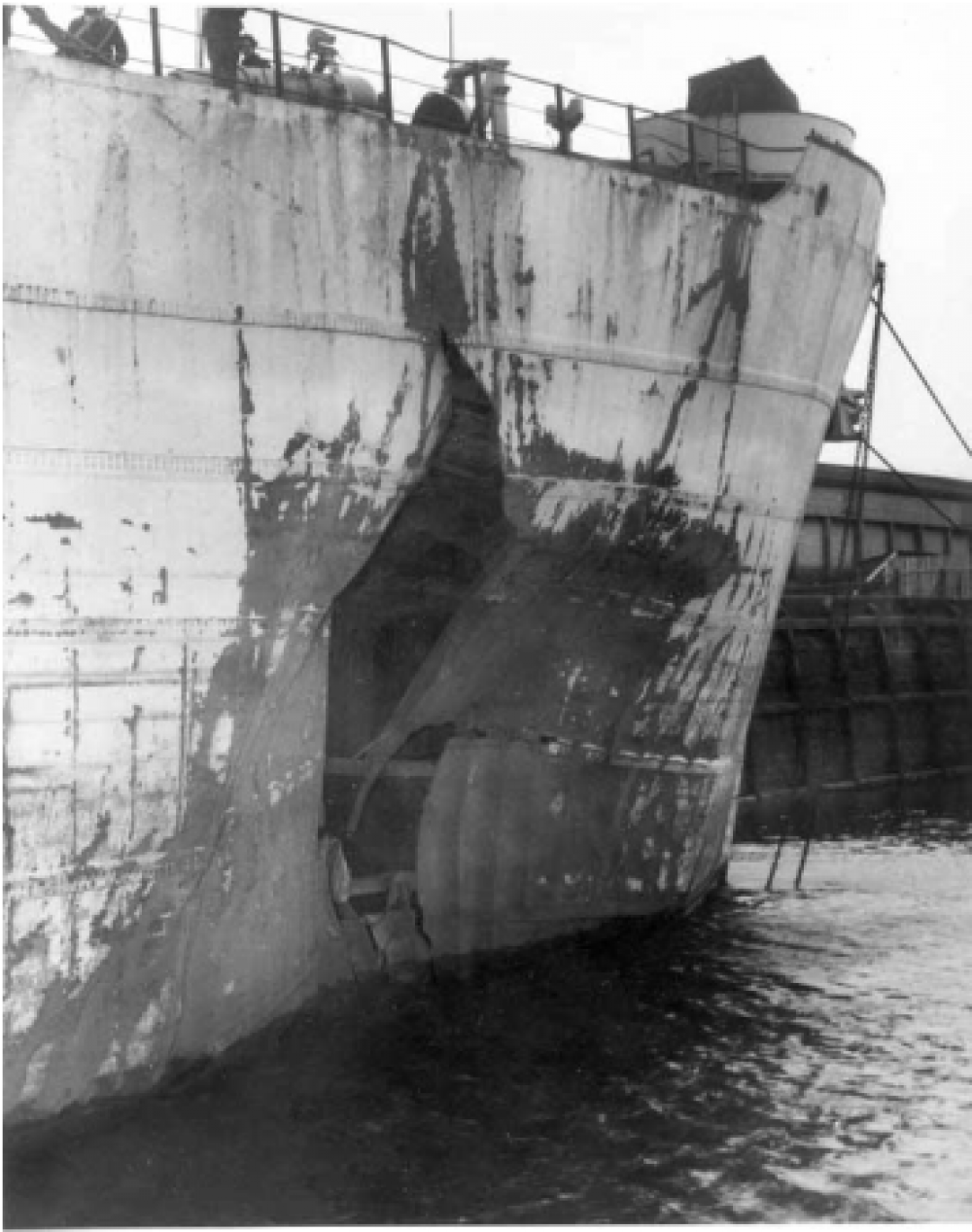 The recessed hull of the Fort Thompson after it was torpedoed. Source: Library and Archives Canada, Naval Museum of Quebec.