In Quebec, in order to look for or excavate wrecks you must have an archaeological research permit. Section 68 of the Cultural Heritage Act (R.S.Q., 2011, chap. 21, division VI, p.19) states, “No person may carry out excavations or surveys to find archaeological property or sites in or on an immovable without having previously obtained an archaeological research permit from the Minister […]”.
Thus, it is illegal to use geophysical detection methods and dive to locate wrecks without first obtaining a permit from the Quebec Ministry of Culture and Communications (MCC). AECOM’s Érik Phaneuf obtained the permit and accompanied our team in the field for this project.

From a legal standpoint, defining a wreck is quite a tricky affair. According to Transports Canada, “a wreck can be a ship or boat of any description, an aircraft, or a part of a ship, boat or airplane (e.g. cargo, stores, tackle); it can be any part of a ship, boat or aircraft that floats, sinks to the bottom or lands ashore; it can be cargo or the personal belongings of the crew or those shipwrecked persons” (Transports Canada, 2014).
Wrecks can be given patrimonial titles. In Quebec, so-called patrimonial wrecks, which unofficially must be at least 50 years old, are not specifically mentioned in law, but are considered to be archaeological sites. The new Cultural Heritage Act (R.S.Q., 2011), which came into effect in 2013, defines “archaeological property” and “archaeological site” as “any property or site indicating prehistoric or historic human occupation”, and “heritage site” as “a place […], a land area that is of interest for its archaeological, architectural, artistic, emblematic, ethnological, historical, […]” (R.S.Q., 2011, chap. 1, p. 5-6). Furthermore, according to Section 48 of this same Act, “No person may, without the Minister’s authorization, alter, restore, repair, change in any way or demolish all or part of a classified heritage property […]” (R.S.Q., 2011, chap. 3, division IV, p. 15).

Our legal responsibility does not end once a wreck has been located. In fact, locating a wreck is subject to provincial and federal legislation. A statutory declaration must be made to both levels of government.
Regarding the Federal Government: Article 155 of the Canada Shipping Act, 2001 (S.C. 2001, c. 26) states that, “any person who finds and takes possession of a wreck in Canada, or who brings wreck into Canada, the owner of which is not known, shall, as soon as feasible:

2. Preparing for a Research Mission 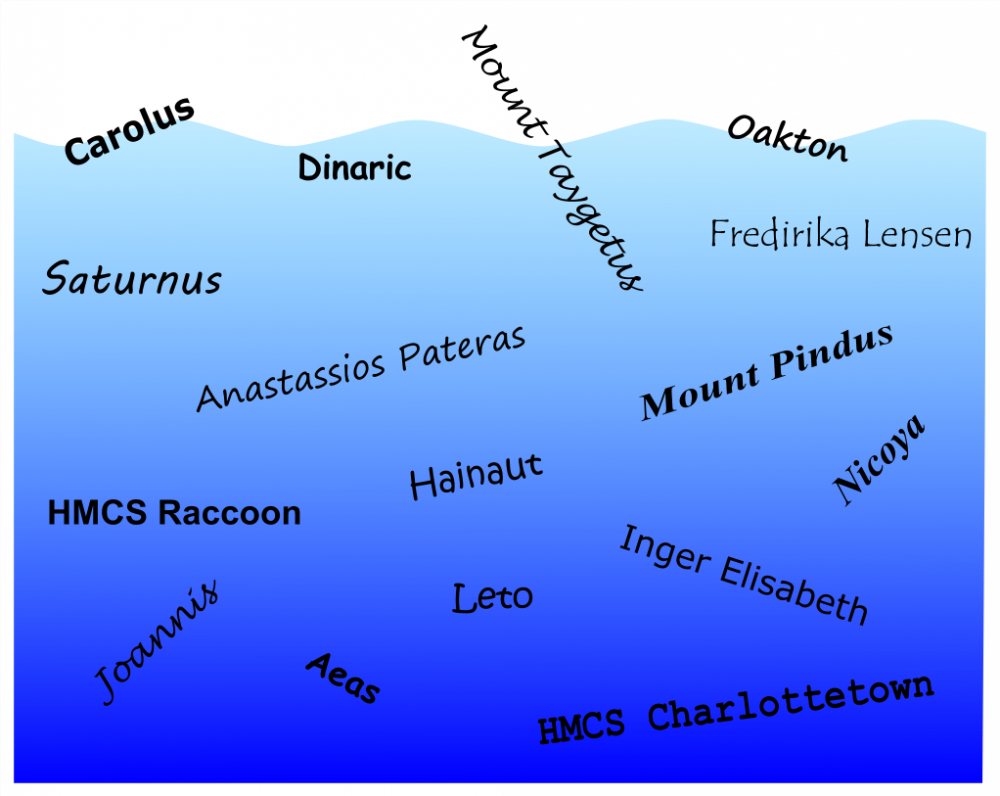 Following extensive research, Samuel Côté identified 16 ships that were sunk in Quebec during the Battle of the St. Lawrence. Prior to our research mission, only three wrecks had been located.

The primary and secondary sources compiled by Samuel allowed us to position each wreck. Several parametres were taken into account to determine the final position, such as:

The positions were more or less precise. Precision depends on the source. For example, the wreck of the Carolus, which was located in 2006, is about 2.5km from the likely position when it was torpedoed, which was taken from a document entitled: Précisions sur des attaques de sous-marins ennemis contre des navires marchands. Several factors can explain the approximate positioning of the wrecks:
The positions of the 16 ships were then mapped out and assigned a confidence index in terms of precision. 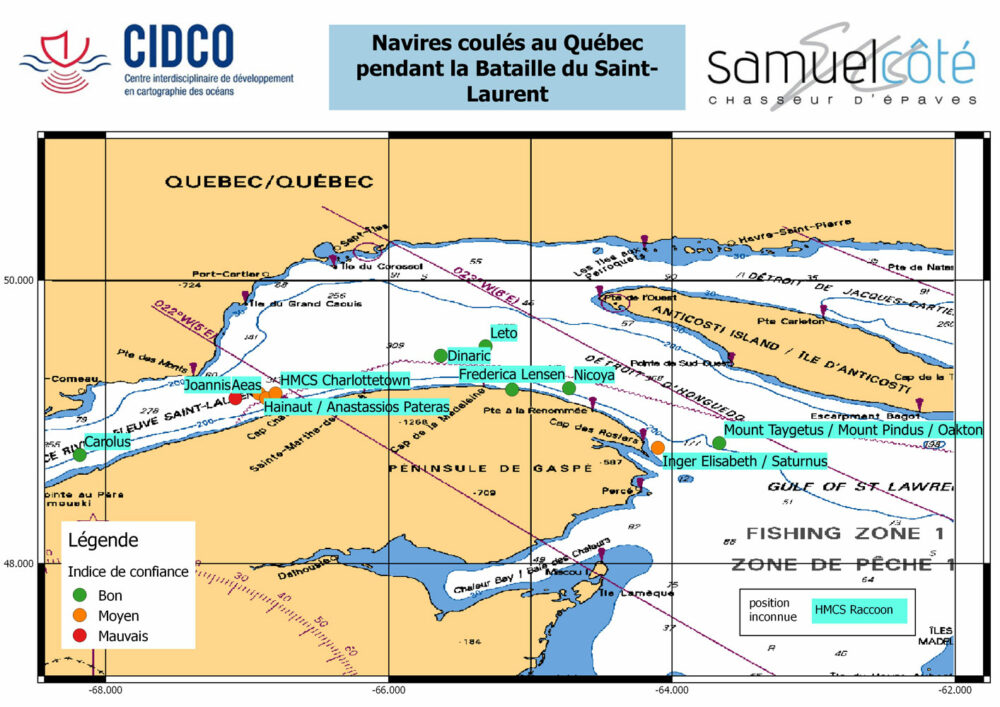 Looking for wrecks is a relatively long process and, therefore, we simply could not try to locate all of the wrecks during the summer of 2015. Thus, we elected to target two research areas. We made this choice based on the position confidence index. After sever discussions, we decided to focus on the wrecks off the tip of the Gaspé Peninsular. Hence, we looked for: 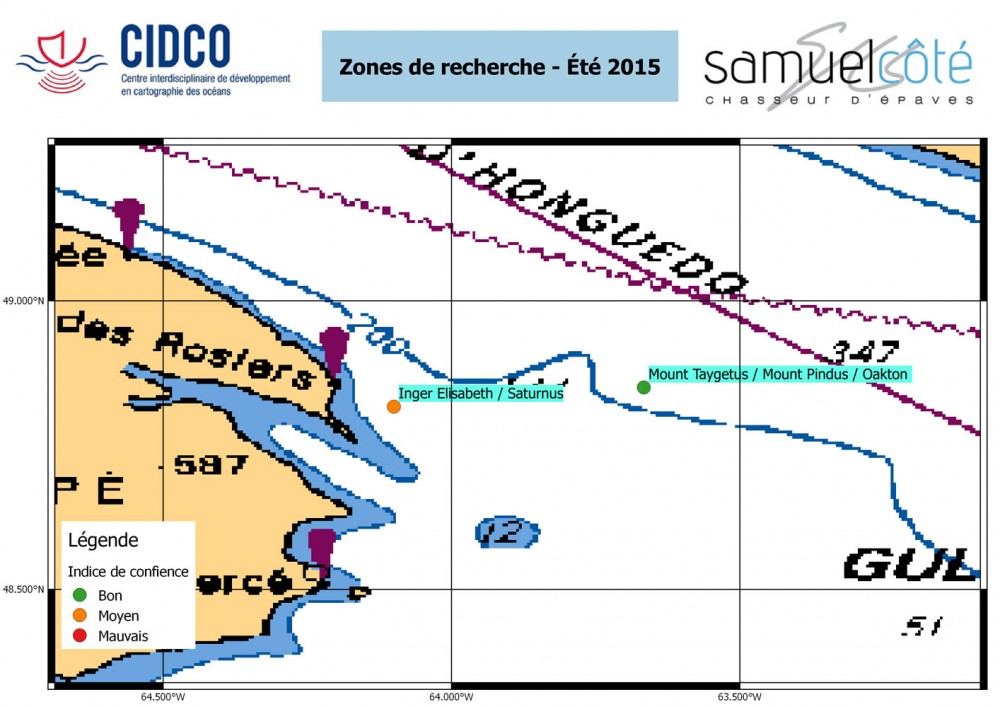 Despite the already-accomplished work, our research areas were still too vast. We therefore had to find further indicators to give us the best possible odds. 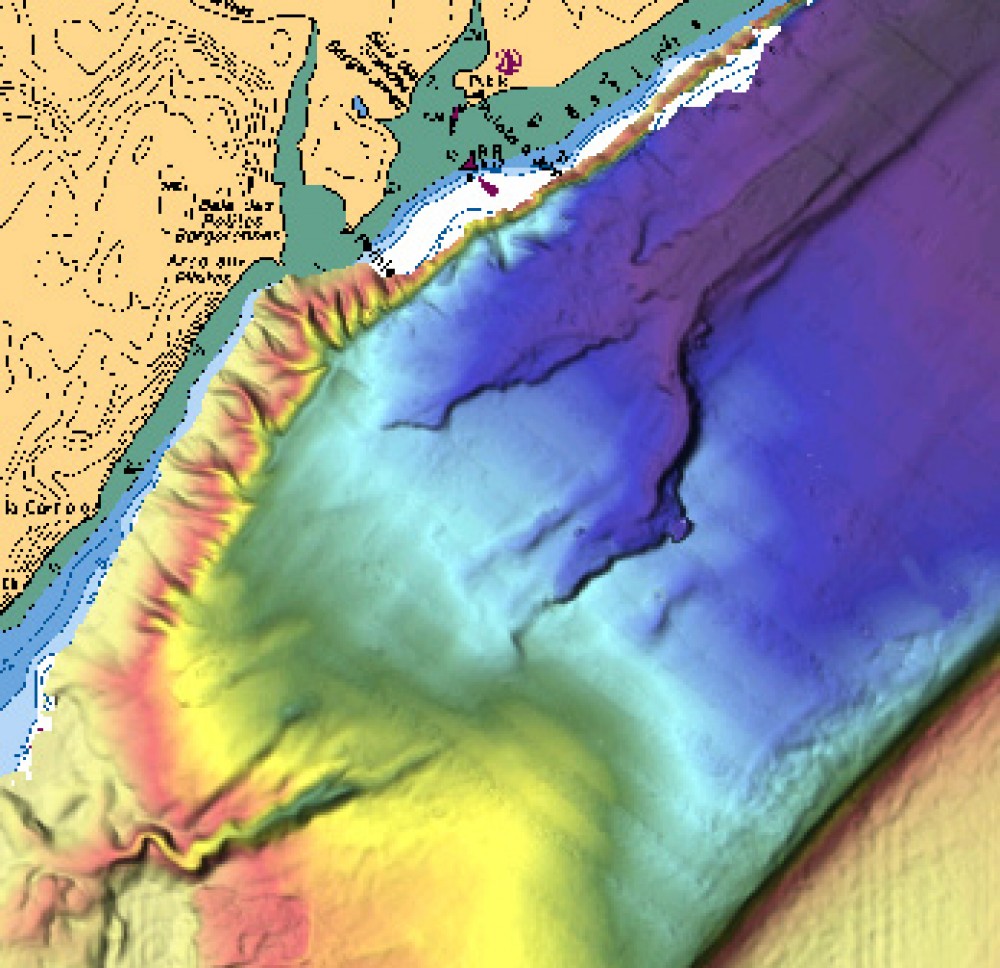 A wreck on the seabed creates an unnatural landform. Topography of the seabed is called bathymetry. Thus, when a wreck is present there is a change in bathymetry. You can access bathymetries of much of our planet’s seabed through various tools, although the precision may vary. In Canada, you can access bathymetry data through the Canadian Hydrography Service (SHC). 500m resolution data is available at the following address. You can acquire higher resolution bathymetry data by requesting it from the SHC.

Before heading off on our mission, we studied the SHC’s bathymetry data to see if we could find any shapes that could have been wrecks. After examining the data, we identified several targets. 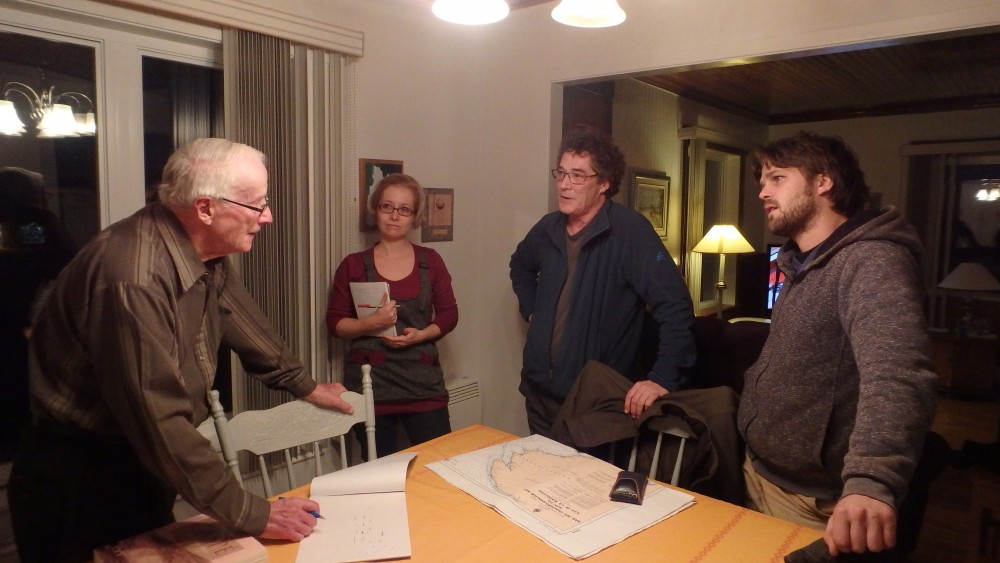 Left to right: Guy Sainte-Croix (witness), Émilie Devoe (Parks Canada), Alain St-Pierre (CIDCO), Sylvain Gautier (CIDCO)
During our research, we noticed that some people who witnessed the Battle of the St. Lawrence remember having seen the sinking of the wrecks we were looking for. They very generously shared their memories with us.
No one saw the Mount Taygetus, the Mount Pindus or the Oakton sinking, as they were too far from the shore. However, Cap-des-Rosiers inhabitants witnessed both the Inger Elisabeth and the Saturnus sinking. One witness, who was out on his barge fishing, recalls: “the first ship sank quickly and broke into two, it was at the front of the convoy. The second ship was in the middle of the convoy, it took longer to sink.”  Another witness told us that you could see the two ships from the Cap-des-Rosiers lighthouse, and that explosions took place right in the middle of an area for fishing herring. At the time, depths were measured in line. Mr. Sainte-Croix told us his story in such a detailed way it seemed like it had only happened yesterday. Thanks to his testimony we can convert the local measurements into fathoms and metres.
This precious information allowed us to refine our research areas and prioritize certain targets using bathymetry data.

Once we had all the information we needed, we set out into the field to see what was underwater.

We cannot see underwater like we can see on the ground. On the ground we perceive information through optical wavelengths. However, optical wavelengths do not travel well through water and so our field of vision is severely reduced. In order to perceive information across long distances underwater, you have to use acoustic wavelengths as, for example, marine mammals do.
The overall rule for using acoustic wavelengths is simple: we send sound into the water, when it hits a target (the seabed, for example), the sound bounces back in the direction it came from. We calculate the time it takes for the sound to reach the target and return to us in order to obtain a distance and depth. 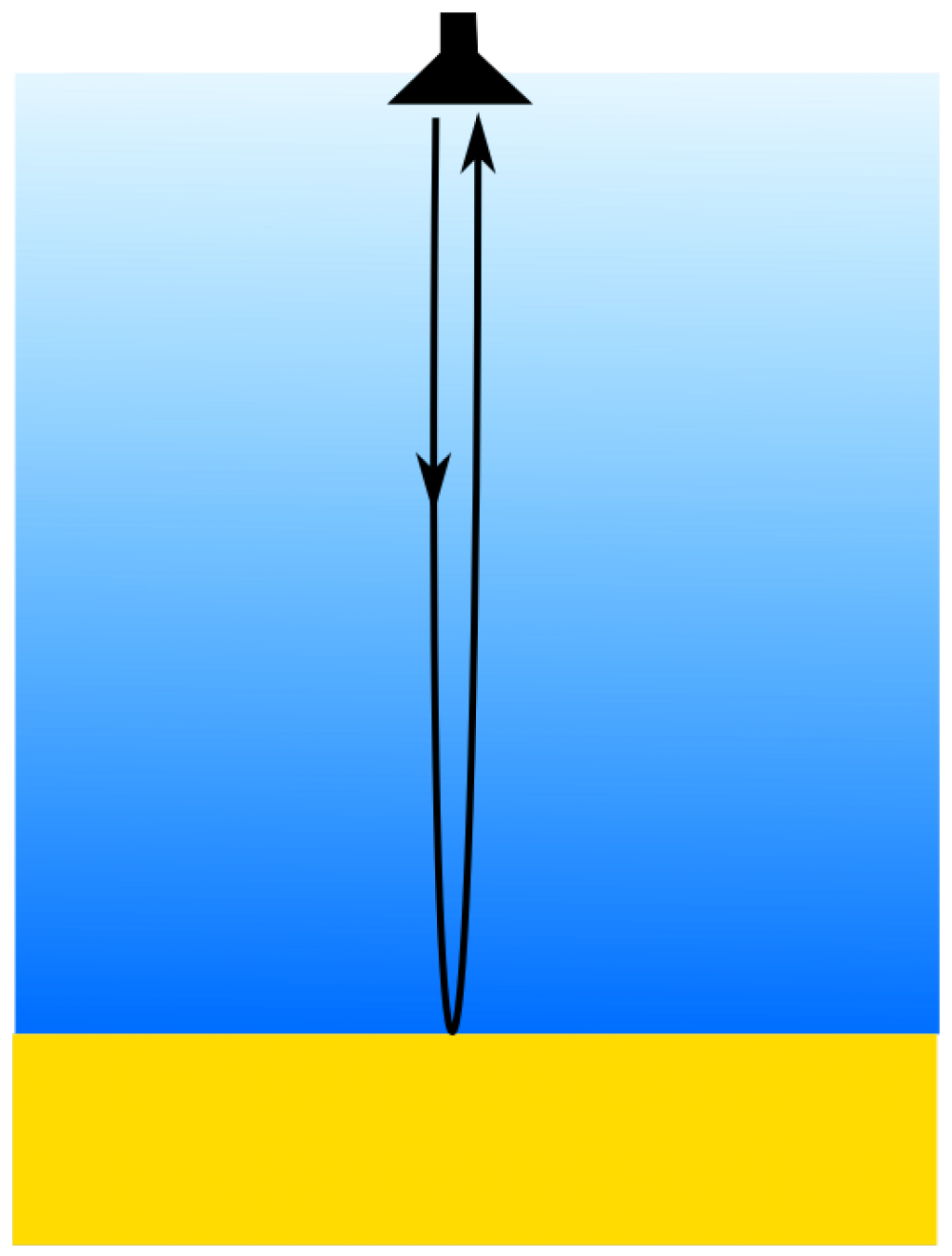 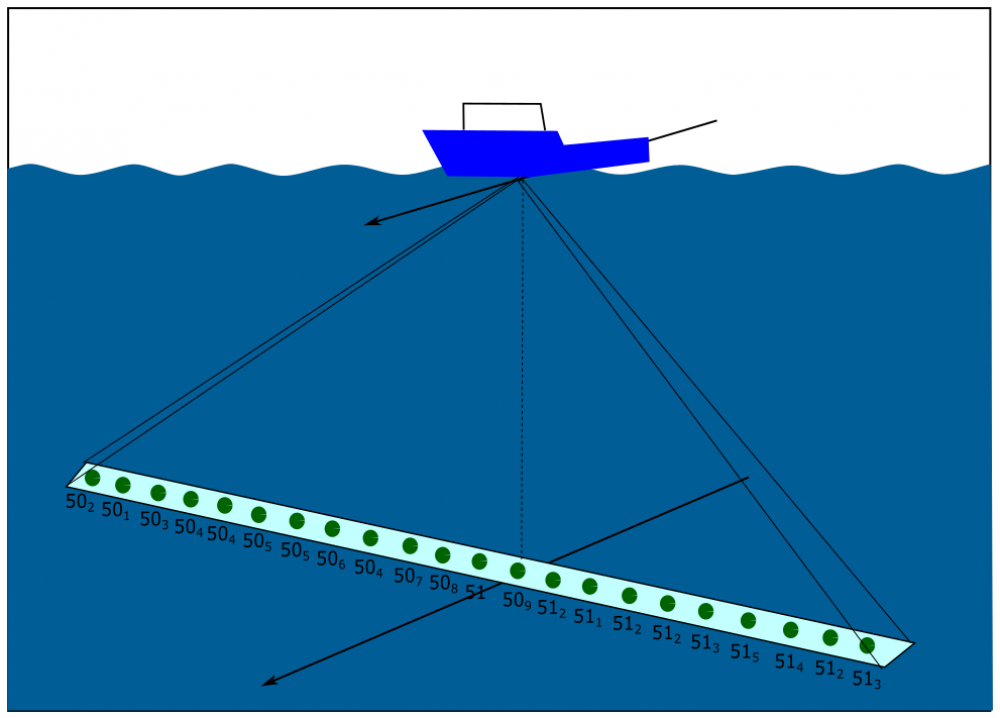 General rule for multibeam echo sounders.
By passing over the area several times you can obtain depth measurements across the entire area. Thus, you can make out the shape on the seabed, i.e. the bathymetry of the area, and recognize certain shapes, such as those that resemble shipwrecks. 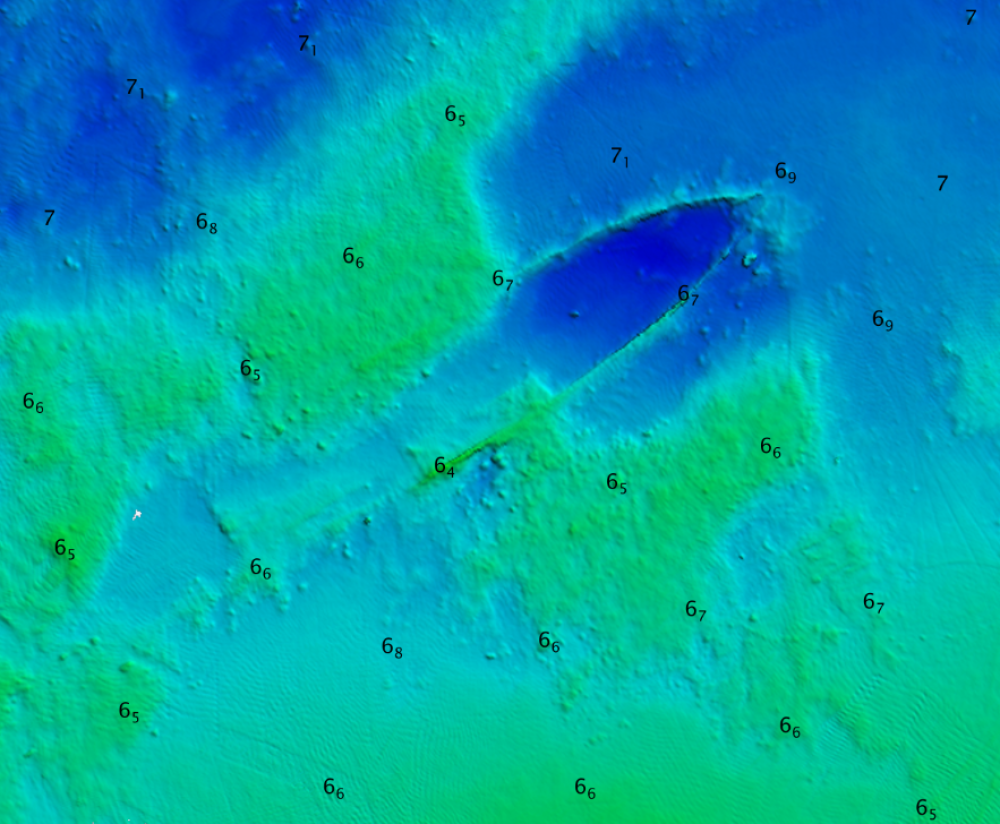 Numerical model of the area obtained with a multibeam echo sounder.
People who use echo sounders for bathymetry are known as hydrographers. If you would like to find out more information about this job, you can contact the CIDCO team or have a look at this website (in French): http://carrierehydrographe.weebly.com/

We used two boats to locate wrecks from the Battle of the St. Lawrence:
The F.J. Saucier, CIDCO’s surveying star. This boat can be deployed quickly and manoeuvre in shallow depths. It is 8.2-metres-long and has a 0.7 metre draft. 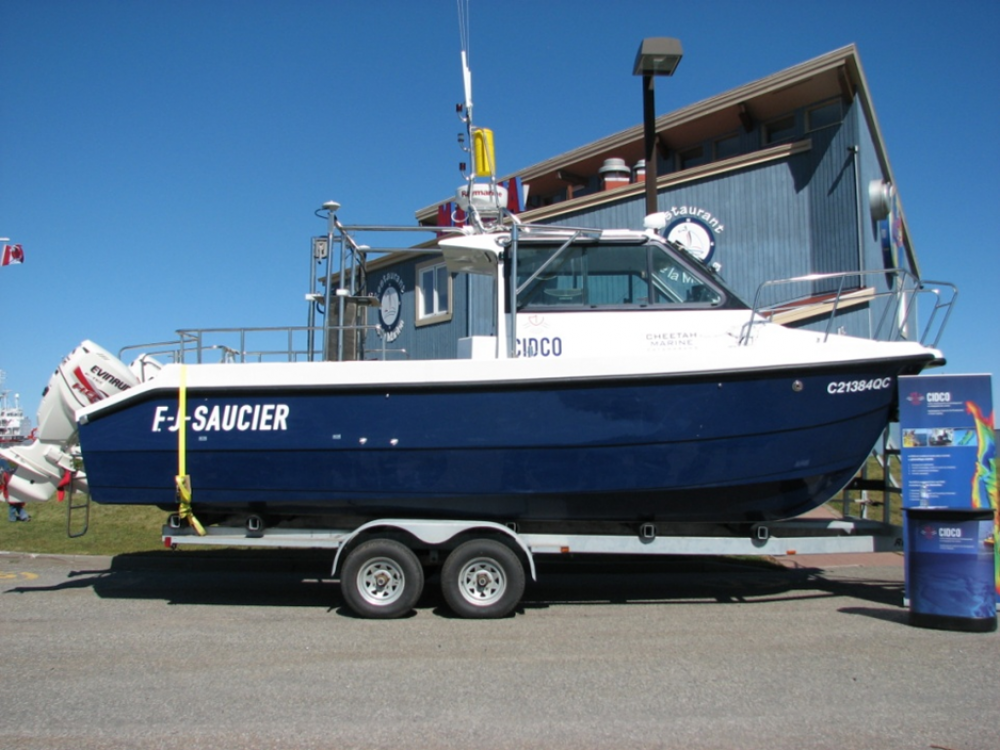 The Coriolis II, a Canadian oceanographic research ship that belongs to the REFORMAR consortium. We were able to use this ship to travel further away from the coast and thus carry out bathymetry at great depths. It is 50-metres-long and has a 5.2 metre draft. 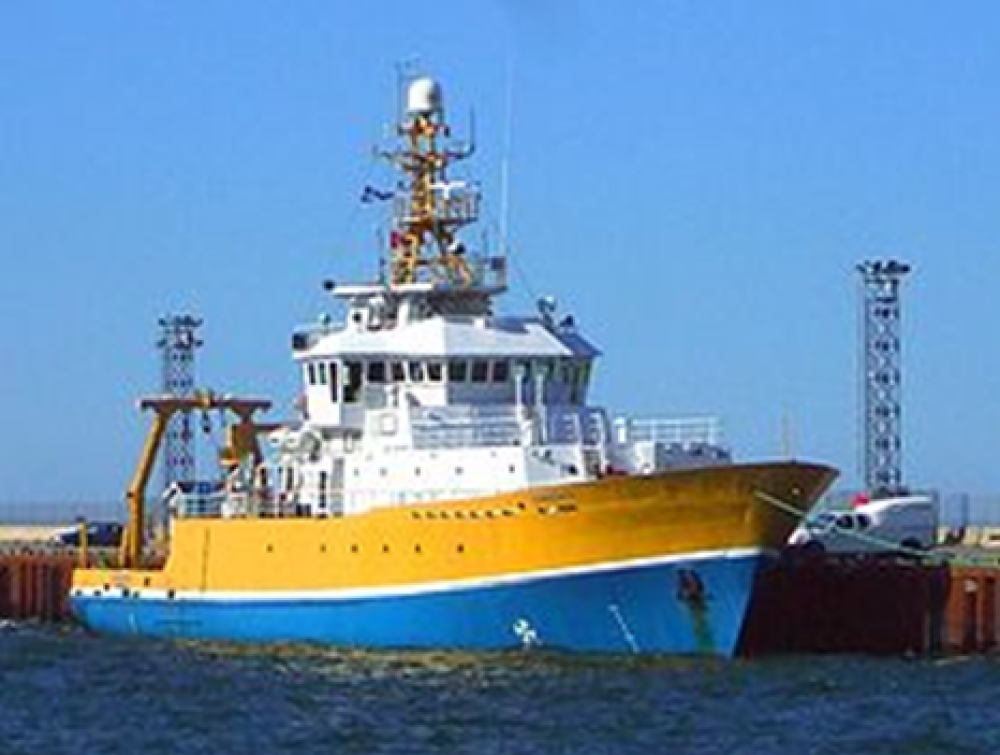 When we travel over an area using an echo sounder we say that we are insonifying the area. During this project, we spent three days at sea and insonified a total of 220 km2 of the seabed. 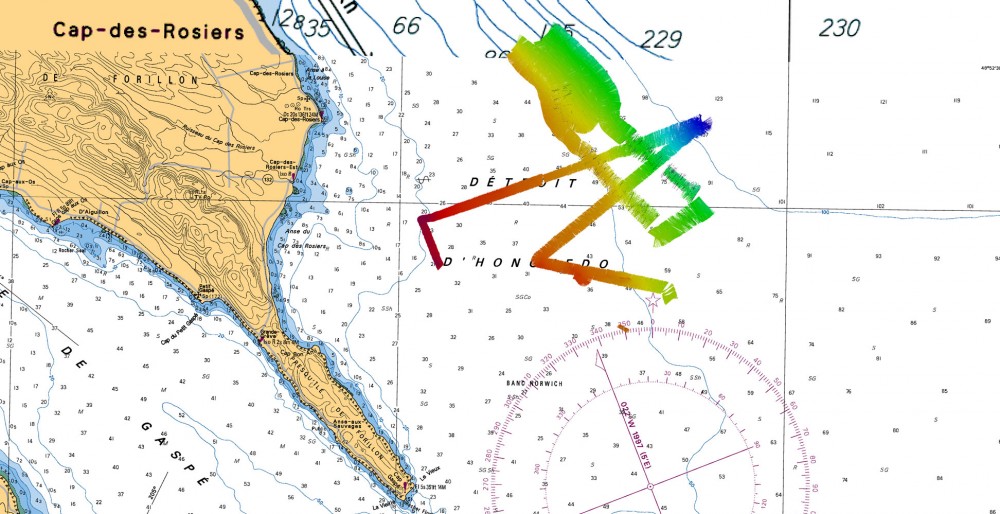 Looking for the Inger Elisabeth and the Saturnus. 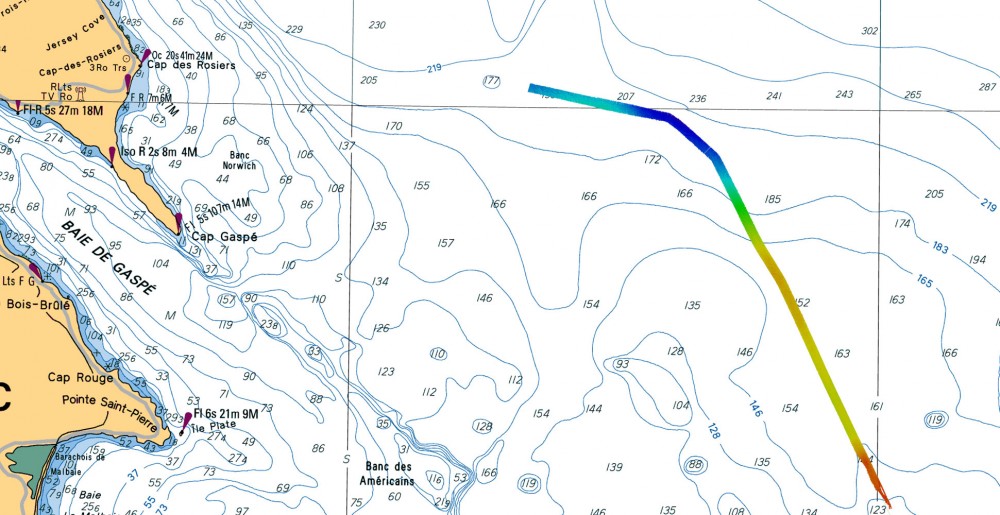 Looking for the Mount Pindus, the Mount Taygetus and the Oakton.

After our research mission, we returned home with tonnes of research we needed to analyze in order to confirm the discovery of wrecks. The first step was to clean the data in order to take out the non-pertinent information that was interfering with our analysis. Whenever we saw what we believed to be the shape of a wreck, we took its measurements to confirm whether or not it was. 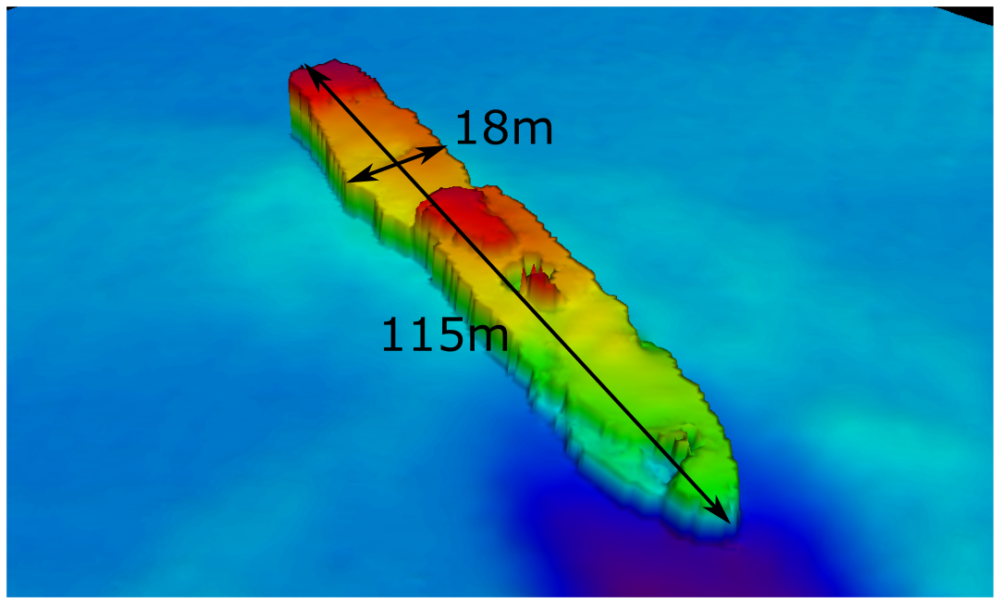 Once the CIDCO team finished their wreck data analysis, all of the information was transferred to Samuel Côté and Érik Phaneuf so they could identify the wreck and report it to the government.
Bathymetry data provided us with sizes, it also allowed us to discover the current state of the wreck and to learn more about damages to the ship. Thus, by crosschecking this information with our bibliographic sources about the shipwreck, we were able to identify the wrecks.