The Battle of the St. Lawrence

Despite their success, it was a difficult campaign for the U-boat commanders. Canadian forces, particularly the air force, attacked often and with precision. Their retaliation damaged many U-boats to the extent that commanders often had to retreat and dive into the abyss. Some U-boats were hit, but none were sunk.

To introduce the subject of convoy sailing and to describe the beginning of hostilities, we have chosen extracts from articles and the book No Higher Purpose (2002).

A convoy system was employed in Canadian waters from May 1942. During the Battle of the St. Lawrence, Canadian warships were mandated to escort merchant ships. These ships left the port of Quebec and sailed down-stream on the St. Lawrence unescorted until just off the Coast of Bic Island, close to Rimouski.

Just off the Coast of Bic Island, all merchant ships had to arrange themselves in convoy formation. Ships carrying cargo believed to be the main target of German torpedoes, such as oil tankers, sailed in the centre of the convoy, where they could be best protected. Escorted convoys were obligatory for warships and the only acceptable reason for breaking ranks was in case of a U-boat attack. Convoys sailed towards the east in long zigzags; this threw German torpedoes off course, but did lengthen the journey and use more fuel.

Convoys sailed at the speed of their slowest ship. After a port of call in Rimouski, convoyed ships slowed and their pilot disembarked at the Pointe-au-Père pilot station. From there, in small convoys escorted by warships, they began the perilous journey that would take them past Gaspé, then Cape Breton Island and on to the Atlantic.

These convoys, made up of requisitioned merchant ships, would cross the Atlantic to supply Great-Britain with food, munitions, weapons and petrol, but were also essential along the North American coasts and on the River. Along the coasts and the ocean, they had to ensure that the supply network was as effective and safe as could be. Other convoys were tasked with transporting building materials to the Goose Bay air base, and others with restocking supplies at America’s Arctic air base, which was under construction.

Once at sea, the convoys formed up into a large rectangle made up of short columns 1km apart, with each ship keeping a distance of 350 to 550 meters between its rear and the front of the ship behind. The group also had a commodore, who would be aboard the merchant ship at the front of the central line, and who would supervise the convoy. 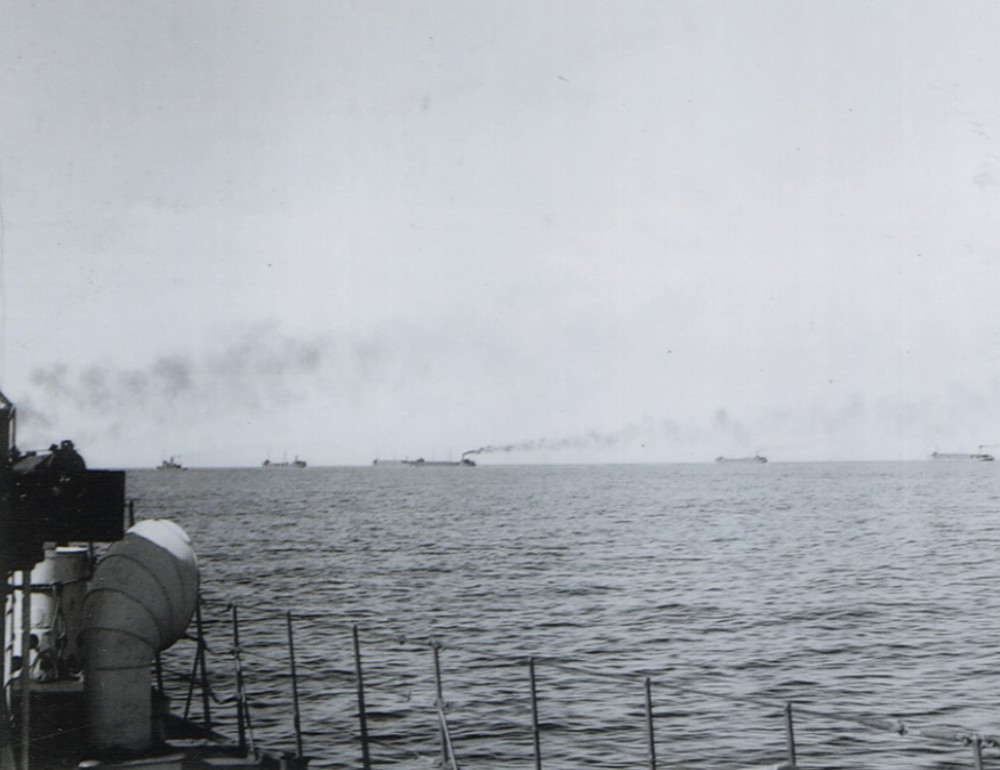 The commander was usually at the front, whereas the convoy’s commodore would be in the front row of one of the central columns. Each convoy had its own code; the letters used refer to the origin and destination of the convoy. Thus, Convoy QS-12 leaving Quebec for Sydney, Nova Scotia, was the 12th convoy to make this trip.

From July 1942, convoys were hit hard by German attacks. After convoys QS-15 and QS-19, the losses suffered to convoy QS-33 represent almost a quarter of all ships lost during the Battle of the St. Lawrence. On September 6 and September 7 alone, German U-boats U-165 and U-517 sunk 5 ships.

Faced with a rising toll on lives and shipping, the Canadian government closed the St. Lawrence to all trans-Atlantic shipping on September 9, 1942, and limited coastal convoys to essential levels. This still left considerable work for the defenders, as 40 per cent of traffic on the Sydney-Quebec corridor supported economically vital coastal shipping. Their task was made all the more difficult by a controversial naval decision to divert 17 desperately-needed corvettes to Operation Torch, the impending invasion of North Africa.

Despite closing the river and gulf to all trans-Atlantic shipping, German submarine U-517 sunk corvette HMCS Charlottetown on September 11, 1942. Four merchant ships were sunk in Quebec during the following days.

[…] the tightening of Canadian defence in the autumn of 1942, in particular the offensive air patrols, made the submarines’ traditional chasing tactics impossible, and thus, the Germans “evacuated” the St. Lawrence at the end of autumn 1942. However, the threat was not entirely eliminated, in 1944, German U-boats sunk two Canadian warships.

For more information on convoy sailing:

The Battle of the Atlantic: Materials for Educators, http://www.quai21.ca/sites/default/files/uploads/education/FR_battleatlantic.pdf, p. 8-20.

The Beginning of Hostilities

[…] the tightening of the allies’ defence in the Western Atlantic between February and May 1942, persuaded [Grand-Admiral Karl] Dönitz to deploy his U-boats in less highly protected waters.

The U-boat campaign on the St. Lawrence began by chance, but would come to be of the highest importance, first of all for Canada and ultimately for German operations. […] U-boat U-533 was damaged by escorts south of Newfoundland in May, 1942. Serious mechanical failures added to the damage, Commander [Karl] Thurmann believed that he could not begin repair work whilst in the highly defended waters surrounding Halifax. As a result, he decided, rationally, to retreat to calmer waters in the Gulf of

St. Lawrence, which had just been freed of its winter covering of ice. This allowed him to ambush ships picking back up their activities in coastal waters. Shortly after midnight on May 12, Thurmann arrived off the northern coast of the Gaspé peninsular and quickly sunk two ships, the Nicoya and the Leto. These two vessels had left Montreal on May 10, one was headed towards Halifax and the other towards Sydney to join the trans-Atlantic convoys.

For more information on the Battle of the St. Lawrence:

Battle of the St. Lawrence, https://en.wikipedia.org/wiki/Battle_of_the_St._Lawrence

Battle of the Gulf of St. Lawrence, http://www.veterans.gc.ca/eng/remembrance/history/second-world-war/battle-gulf-st-lawrence

The Summer of 1943: An Episode in the Battle of the St. Lawrence River – Surveillance, Defence and Propaganda, http://www.journal.forces.gc.ca/vo7/no1/history-histoire-01-fra.asp

Battle of the St. Lawrence, http://thecanadianencyclopedia.ca/en/article/battle-of-the-st-lawrence/

You are now ready to experience first-hand the Battle of the St. Lawrence as it happened in Quebec. This animated reconstruction lifts the veil on a little-known episode of the Second World War.